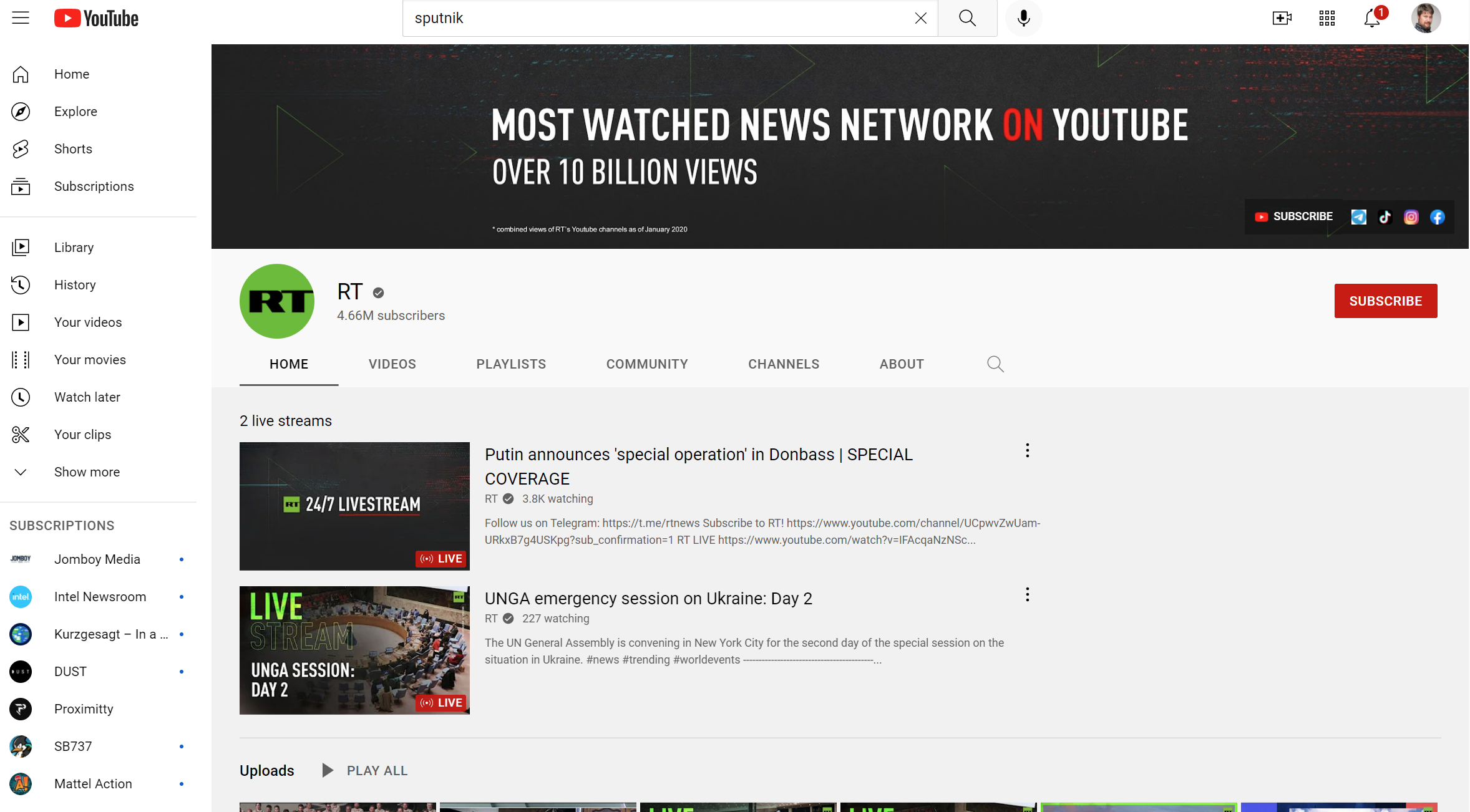 Google adopted Microsoft’s actions to restrict Russian propaganda by saying Tuesday that it might block Russian state-owned channels on YouTube inside Europe and likewise crack down on “misleading practices” elsewhere on the location.

Google mentioned it might block the channels Russia At present (RT) and Sputnik, each operated by the Russian authorities, throughout Europe. “Linked” channels, such RT America, RT Dwell, and RT Sport MMA, will even be blocked. Correction: Google mentioned that it might solely block the YouTube channels throughout Europe. A earlier model of this story implied that the block can be worldwide.

Whereas Google mentioned that it intends to dam Russian state-sponsored propaganda on its video feeds, it’s not clear that Google is taking the identical actions as Microsoft. On Monday, Microsoft mentioned that it might block information from Sputnik and Russia At present, each owned by the Russian authorities, from its search outcomes and its Begin information feed. On Tuesday, Google mentioned solely that it has “considerably restricted suggestions globally for quite a few Russian state-funded media shops throughout our platforms,” with out saying whether or not that features search outcomes or not.

Google mentioned Tuesday that its actions added on to its current de-monetization of Russian state-funded media. Google additionally mentioned that it’s working to make “dependable and reliable info available.” “When folks around the globe seek for subjects associated to the struggle in Ukraine on Search or YouTube, our programs prominently floor info, movies, and different key context from authoritative information sources,” the corporate mentioned in a weblog submit.

Nonetheless, Google has additionally declined to withdraw its companies from Russia. Google mentioned that it might proceed to function in Russia, whereas promising to adjust to sanctions necessities. Google Search, Maps, and YouTube stay accessible in Russia, “persevering with to supply entry to international info and views.”

As PCWorld’s senior editor, Mark focuses on Microsoft information and chip expertise, amongst different beats. He has previously written for PCMag, BYTE, Slashdot, eWEEK, and ReadWrite.