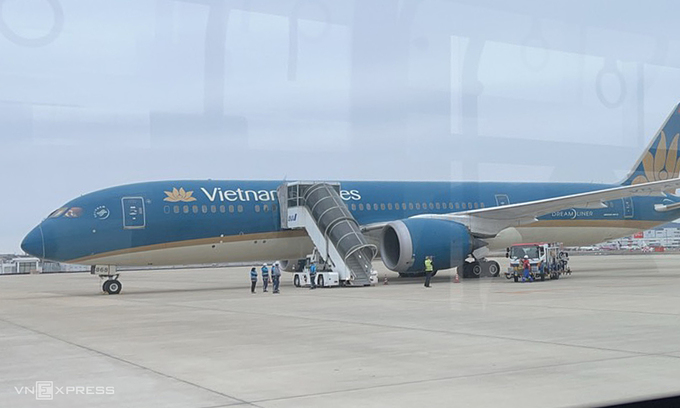 A Boeing 787 lands at Fukuoka Airport for a safety verify after the flight acquired a capturing risk, January 5, 2021. Picture by VnExpress/Xuan Hoa

A 17-year-old boy in Japan’s Yamagata Prefecture has been detained for allegedly threatening to shoot down a passenger airplane from Tokyo to Hanoi final month.

Based on Chiba prefectural police, the boy was discovered after police tracked his cellphone quantity and arrested Tuesday.

They acknowledged the boy has admitted making the cellphone name and that he has a psychological incapacity, Japanese media reported.

The Vietnam Airways flight from Tokyo to Hanoi on Jan. 5 needed to flip again following a capturing risk by an individual claiming to be American and talking Japanese.

The particular person referred to as the airline’s workplace in Japan and stated: “Flight VN5311 had higher flip again to Narita or it will be shot down when flying over Tokyo Bay.”

By the point the risk was made, the plane, a Boeing 787, had already handed Tokyo Bay. There have been 47 passengers and 15 crew members on board.

After discussions with Japanese authorities, the Civil Aviation Authority of Vietnam (CAAV) let the airplane flip round and land at Fukuoka Airport for a safety verify.

The airport then organized safety and technical employees to assessment flight info and security.

Japanese officers visited the airport and spoke to the flight crew and passengers to guage the state of affairs. After discovering no uncommon indicators and deeming it secure to proceed, the flight was allowed to depart Fukuoka for Hanoi, the place it landed at 6:12 p.m.

Passengers have been knowledgeable the plane had some “technical issues.” All arrived safely in Hanoi and didn’t be taught something in regards to the risk till touchdown.